Working From Home Tips That’ll Help You Stay Productive, No Matter What You Do

It’s not hard to come across generic working from home tips for just about every profession.

Whether you’re a sales assistant, DIY crafter, or technical developer, tips for working from home are general. Find a routine, stick to it, so on and so forth.

And that’s great, as it applies to most work that can be done from home.

But when your workflows revolve around the office how do you work from home successfully?

END_OF_DOCUMENT_TOKEN_TO_BE_REPLACED

Did you know that 78% of job applicants lie during the recruitment process, with 60% declaring a mastery of skill they hardly ever used? Shocking, isn’t it? Luckily, you can use a skills assessment interview to verify your candidates’ skills.

In this article, we’re going to tell you which employee skills assessment methods you can select from, why it’s worth investing your time in them, as well as give you a few tips on making your skills assessments interviews more effective. Let’s begin!

END_OF_DOCUMENT_TOKEN_TO_BE_REPLACED

How to assess programming skills – a review of the best methods

Did you know that the costs of recruiting a software developer can be as high as $60k? Unless you’ve got a huge recruiting budget, you can’t afford to hire an employee whose skills haven’t been verified and just hope for the best. In fact, knowing how to assess programming skills, whether front end, back end, or full stack, is fundamental to any successful IT recruitment process.

In the following article, we’re going to review how to assess programming skills using different assessment methods, with a special focus on the optimal setup, namely the work sample coding tests followed by the HR and technical interview. By following our advice, you’ll minimize the risk of hiring an under- or over-performing candidate, or simply someone who isn’t a good fit for your company.

18 recruiting tools every recruiter should use in their recruitment process

The technology and capabilities of modern recruiting tools are something that’d leave even the most tech-savvy of us in awe.

These hiring tools are designed to make an HR recruiter of any industry find better talent, hold a better interview, and employ a better employee. They’re created for both corporations that make an insane number of hires every month, as well as those that seldom hire new staff.

But with so many recruiting tools for employers out there, how does an HR manager pick out the best from the rest?

END_OF_DOCUMENT_TOKEN_TO_BE_REPLACED

Web development. It’s an all-encompassing term. “What does a web developer do?” is a common question that is often asked by people outside of the tech field.

To help you understand the requirements and definition of this role, we have compiled a web developer job description to help spell out the details.

What is a web developer


Generally speaking, web developers are employed to write code using a variety of programming languages. The most skilled developers are not only fluent in many languages, but importantly they are able to continue learning new technologies and strive to find the best method to solve a problem.

END_OF_DOCUMENT_TOKEN_TO_BE_REPLACED

By Lewis StoweHuman Resources, IT recruitment

A high attrition rate causes problems in the tech industry.

The employee turnover rate in the tech sector stands at 13.2% and is higher than in any other business sector. Even companies who have mastered recruitment and onboarding to perfection still struggle with talent retention. Is a high attrition rate a given and something that HR departments should accept? 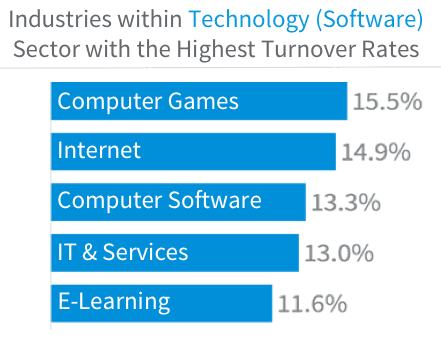 Definitely not – in this article, we’re going to share with you the main reasons why tech employees leave their jobs, and what tech employers can do to decrease employee turnover rate.  END_OF_DOCUMENT_TOKEN_TO_BE_REPLACED

C++ developers are constantly in demand in the job market and knowing expected C++ developer salary is important. At the same time, C++ is widely used across industries, mainly in an application domain. In fact, C++ can be found everywhere. Microsoft Windows, Mac OSX, Linux – all of these operating systems are programmed in C++ and C, So are two of the most popular databases – MySQL and Postgres. C++ is also widely used as a backend technology in graphics applications that employ computer vision and high-end graphical processing, including games that are heavy on graphics. What is more, C++ is suitable for embedded systems (smartwatches, medical machines, etc.), financial systems, telephone switches, cloud storage systems, browsers, and compilers.

What makes C++ such a widely used and trusted backend technology? It’s a general-purpose, compiled, statically typed, case sensitive, and free-form programming language which is an enhanced version of C. C++ provides rich library support in the form of Standard Template Library (STL). One of the biggest advantages of the language is its speed: C++ is faster than most programming languages.

C++ developers are responsible for writing efficient code in C++ or modifying the existing code in order to develop various applications and programs. They’re also in charge of managing memory consumption issues. In short, a C++ developer is supposed to create executable programs that facilitate organizational operations.

END_OF_DOCUMENT_TOKEN_TO_BE_REPLACED

Let’s start with the most straightforward definition possible – a web developer creates web-based applications. Most web developers are focused on either the back end of a web app (databases, applications, servers) or on the front end (interfaces, the visual side). Some web developers cover all of these aspects. These are known as full-stack developers. This variety makes web development a quite broad field. A developer may be responsible for the backbone of a web application, its user-facing side or both of them. END_OF_DOCUMENT_TOKEN_TO_BE_REPLACED

While React gets all of the big press, React Native has steadily become an essential part of the JavaScript universe. It allows mobile developers to write mobile applications that can be ported to both iOS and Android. The advantage of this is that instead of having to develop separate iOS skills (Objective-C and Swift) and Android skills (Java and Kotlin), mobile app developers can draw on JavaScript, the most commonly used language at the moment. But like all tech stacks, it’s not enough to simply know JavaScript. You need to have an in-depth understanding of React Native. So how can employers tell if a React Native developer has the skills they need?

END_OF_DOCUMENT_TOKEN_TO_BE_REPLACED

In this article, we’ll be covering the following topics:

END_OF_DOCUMENT_TOKEN_TO_BE_REPLACED

Front-end development means creating components and features that are directly accessed by a user through the front-end of a website. Front-end developers create everything on a website that users see, touch, click, and use. They focus on the visual layout, user interface/interaction, and user experience. In their work, they create the buttons, images, links, and pages that all need to function efficiently, accurately, and quickly in order for the user to carry out a particular task.

Below you can find a front-end developer job description template. This template includes examples of the responsibilities and skills which are typical for such a position. Of course, this template is just a basic starting-point – we strongly recommend that you customize the template so that it fits the exact job which you wish to fill. Please note that, in line with good practice, this front-end developer job description template shows you one way of describing the person you’re searching for, starting from more general requirements, leading up to more specific requirements, and finishing with any optional extra skills or experience.

END_OF_DOCUMENT_TOKEN_TO_BE_REPLACED

Workable is one of the most powerful ATS systems out there and is a particularly useful tool for tech recruitment. When recruiting developers, it’s incredibly important to keep track of your candidates. With as many as 20 people applying for each software development position, a simple spreadsheet won’t scale. But luckily, there is a useful Workable ATS tech recruitment workflow that you can use for hiring developers which will allow you to focus more time on the areas that recruiters are uniquely qualified for. Using Workable and the integrations that it offers, you can automate repetitive tasks. This will allow you to spend more one-on-one time with candidates to see if they are a good cultural fit for the company.

This article will cover the steps of a tech recruitment workflow for hiring developers and how this workflow can be streamlined in Workable. These steps include:

END_OF_DOCUMENT_TOKEN_TO_BE_REPLACED

ISO 27001 at Devskiller will speed up your procurement process

Devskiller has always had a major commitment to security. Our system was built by software professionals who understood that security is not simply a skin that you put over a system. Instead, it’s a state of mind, a way of designing systems that needs to be implemented from the ground up. With our new ISO 27001 certification, our customers can now easily verify what we’ve been doing since the beginning, providing a secure system for their data.

END_OF_DOCUMENT_TOKEN_TO_BE_REPLACED

A lot has happened this spring and summer.  Game of Thrones ended and since winter is no longer coming, it got really hot everywhere. Thanks to some blue-sky thinking and powerful air conditioning, some big changes have happened at Devskiller. These will have a lasting impact on our customers so let’s jump right in. END_OF_DOCUMENT_TOKEN_TO_BE_REPLACED

Hiring the right software developers is hugely important. It requires a large investment (up to $31,970) to get the right person. If you get it wrong, you could be looking at a loss of almost a half million dollars in the worst cases. So every professional and engaged tech recruiter worth their salt is constantly working to build a process that is both efficient and effective.

But it doesn’t have to be that hard. In this video, we explain our proven 7 step formula for hiring the right tech talent. Find out why you should,