How does a Salesforce developer salary compare to that of other developers? It’s well known that the salaries of developers tend to be higher than in most other sectors. But is that the case for all developers? And does it depend on experience, location or various other interrelated factors?

This article will discuss the various factors affecting the average Salesforce developer salary.

Before we discuss the average salary of a Salesforce developer, we first have to discuss what Salesforce is.

Salesforce is a customer relationship management tool, popular with businesses all over the world. It is a technical solution designed to bring companies and customers together through one integrated platform. Salesforce helps companies to manage their marketing, sales, commerce, and service, all in one place.

Salaries for Salesforce developers need to be competitive to attract the best technical engineers.

Key responsibilities of a Salesforce developer

Salesforce developers can also expect to be responsible for modifying existing controllers and triggers. They should also be able to apply the best practices and design patterns of applications. They should also execute unit tests and gather and analyze requirements for new technology enhancements.

A Salesforce developer needs to be varied in their skillset. They need to be able to demonstrate an understanding of a wide range of software engineering concepts. Aswell as be comfortable with object-oriented design.

A Salesforce developer is responsible for integrating customer-driven applications, as well as upgrades. They have to work well with a varied team and be able to create good working relationships with various personality types. This means they need to be an all-rounder. Someone with various qualifications and, ideally, with a range of experience.

For these reasons, finding the right Salesforce developer can be tricky. Offering a competitive salary is essential for attracting the best candidates.

Salesforce developer salaries can vary from country to country and city to city. It also depends on experience. As expected, the more years working in the industry, the more you can expect to earn.

According to the salary-check website Glassdoor, the average Salesforce developer salary in the USA for 2021, is just over $103k per year. That’s according to data taken from 1815 salaries. Not a bad average. However, as we can see from the image below, salaries can range from as low as $78k to as high as $136k, depending on location and experience. More on that later.

However, not all salary-check sites have the average set as high as Glassdoor. Payscale, by contrast, reports the average salesforce developer salary in the USA to be a modest (in comparison) $85,543. 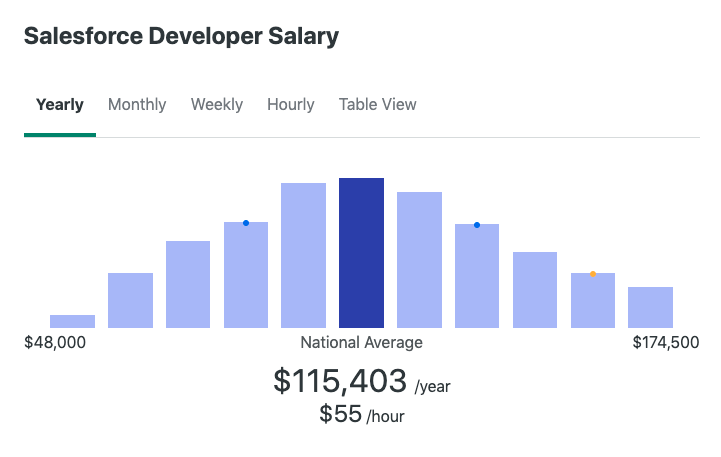 Of course, there are several factors that can dictate how much a Salesforce developer gets paid. A developer’s level of experience is one of the most influential.

According to Payscale, the entry-level salary for a Salesforce developer in the US is $65,353 per year. Not bad for a starting wage. This shows the growing demand for Salesforce engineers.

If you are an even more experienced Salesforce developer with 20+ years of experience under your belt, the sky really is the limit when it comes to salary. For instance, a Salesforce lead position, as mentioned by ZipRecruiter, can return a salary of a whopping $159,438 –  just over $3000 a week.

As with any job, the more experience you have, the more you will earn. Being a Salesforce developer is no exception.

The country you live in dictates your salary. However, where you live within that country can also have a huge impact on how much you earn.

One might expect the most competitive Salesforce developer salary in the USA would be in New York City or San Francisco – not in McLean, Virginia.

According to Indeed, a Senior Salesforce developer working in McLean, Virginia can expect to take home around $126,480 a year – 11% higher than the national average.

One possible reason for this comes down to demand. There are fewer people living somewhere like Virginia than in, say,  New York City or Los Angeles. Therefore there are likely to be less qualified developers in specific fields like Salesforce. Meaning, if a company needs a Salesforce developer, that developer knows their worth. They can afford to haggle a little more than if there were ten other similarly qualified developers sitting outside the interview room.

It’s no surprise to see top tech hubs such as Atlanta, Houston or New York in the top 8. The same as with McLean however, it is a little more surprising seeing cities like Minneapolis or Charlotte, North Carolina on the list.

However, not all salary-checking sites agree with Indeed’s estimation that Virginia cities should come out on top. According to ZipRecruiter, that title goes to Lakes, Alaska, where the average Senior Salesforce developer is earning an impressive $154,350 per year.

The same as with the example of McLean above, this might have something to do with the remoteness of the cities and a lack of Salesforce developers. Meaning the few, can afford to be demanding.

It should also be pointed out, however, that the majority of salaries by city shown in ZipRecruiter’s list, vary only ever so slightly, and so the figures might also be affected by the number of salaries that have been used to work out the average.

The pandemic and Salesforce developer salaries

It is also worth mentioning how the Coronavirus pandemic has and will affect the salaries of developers in the future. And not just Salesforce developers, but developers in many fields around the world.

As remote work becomes more and more common, it has become apparent that a developer working in a Salesforce role, no longer actually has to be living nearby, to work there.

According to Forbes, some companies have adapted to the changes in working environments by advertising that their workers will receive the same wage regardless of location. This might seem a strange move at first, but these companies are simply widening the talent pool to attract the best candidates. It means they don’t have to rely on workers from their own local area- which might spell bad news for those well paid Senior Salesforce developers in remote places like Lakes, Alaska.

However, not all companies are following the trend. Facebook is amongst the technology giants that have already said their wages will be comparable to the local living costs of employees.

If you want to hire a Salesforce developer, you will need to expect to pay a competitive wage. In return for that expense, you will need assurances that they have the skills required, and that’s not always easy to tell.

Check out DevSkiller’s Salesforce coding tests to make sure your candidates have what it takes.