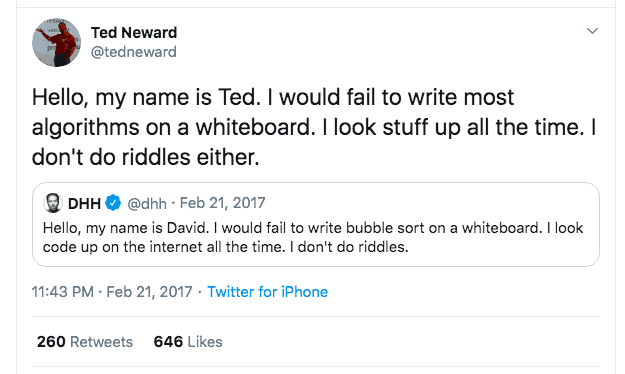 Seriously, you’re probably looking for a new teammate. Would you rather see a pull-solicitar with elegant, recursive code or a single library call? A library battle-tested by millions of developers, based on Donald Knuth’s “The Art of Computer Programming“? Also, it took me a while to find a library, whereas hand-crafted, nested loops are all over the place on the Internet. What kind of attitude are you looking for? Memorizing and blindly copying code from the Internet, or actually doing the research to find battle-proven solutions?

Having a degree in Computer Science, I don’t find algorithmic tests intimidating or pointless. It’s actually quite the opposite, they are great for exercising your brain, like solving sudoku or playing bridge. I attended multiple algorithmic competitions (e.g. Advent of Code) and always found them enjoyable. But that’s just my hobby, you might prefer studying DDD or advanced SQL. And I’m not sure pure algorithms and data structures are a particularly good fit for the majority of job interviews. They do verify a candidate’s abstract analytical habilidades, as well as solid CS and Math background which are both important traits in software engineering. But they fail to capture other important traits or are too convoluted to be conclusive.

These days, most of the work in IT requires stitching together APIs and frameworks. We are more like tailors than fabric producers. Algorithmic proficiency is helpful when scaling a single feature of your system, but more focused experience in distribuido systems will probably get you further. For example, knowing graph theory or discrete functions is valuable. However, hands-on experience with a large network of replicated databases or understanding why some hash functions are compromised has a much larger impact on your daily work. Keep in mind that algorithmic questions are great if that’s really what you need on a daily basis. Machine learning experts need to understand what gradient descent is, and that requires a substantial Math background. Also, statistics, research, computer graphics, and game development tend to require a certain amount of CS background. Otherwise, use your reclutamiento time slot wisely and ask the right questions.