Secondo Brendan Browne, Vice President of Global Talent Acquisition at LinkedIn, you should target people connected to your brand in one way or another to increase your chances of receiving a response.

Come Rapporti di LinkedIn, “Hiring talent has become highly transactional. The tedious candidate searches, the endless scheduling, and the repetitive screening are inefficient and mind-numbing.” As a consequence, both parties involved in the process tend to forget about one very important factor, and that’s being a nice person who treats people respectfully. 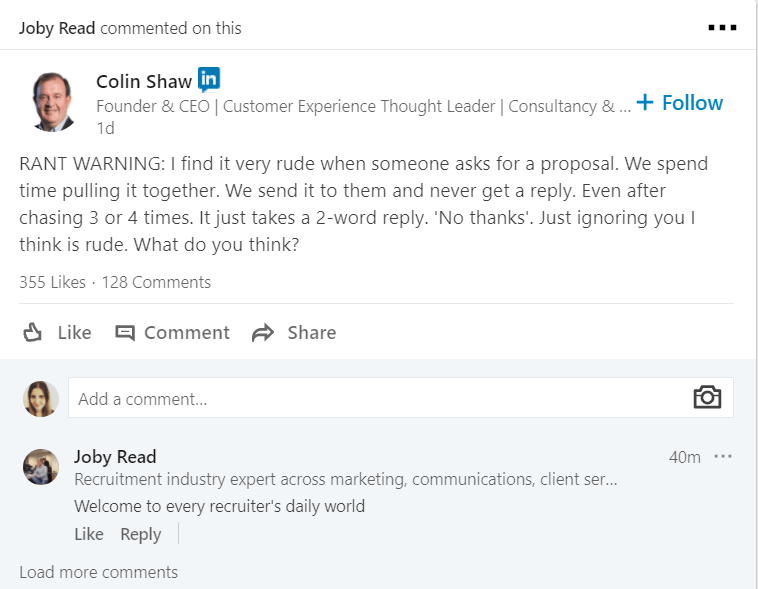 The truth is, most software developers going through your recruitment process get rejected. For that reason, it’s important for your company to devise a functional system of notifying candidates that don’t get hired for the position about their status. Why? Because it makes you lose candidates from your talent pipeline. According to CarrieraArc “Candidates who are NOT informed of the status or decision of their application are 3.5x less likely to re-apply to that company that declined them”. It’s hardly surprising, right? What goes around comes around, after all. Remember that most software developers are passive candidates, so you need to find a way to convince them to make a move. According to Dati di LinkedIn, being uncertain what it’s like to work for a given company is the #1 roadblock to making a job move. When you first reach out, they either already know your company or start Googling. In that case, their opinion of your business is shaped by everything they come across, be it reviews, opinions on discussion groups or social media mentions. According to Glassdoor, 61% of users of the site say they look for “company reviews and ratings before making a decision to apply for a job”. As Robin Schwartz of Offerte di lavoro MFG points out, “Consistency is key in removing bias from hiring processes.” Amen to that.

Secondo Linkedin, you use “images of diverse employees in your materials, present diverse interview panels, talk about ERGs, and recruit at schools with diverse student bodies”.