In general, the data scientist salary depends on several factors:

To give you an overview of the subject, we’ve put together a comparison based on data scientist average salary data across the US from PayScale, Glassdoor, ZipRecruiter, and Indeed. Let’s dive in.

The data scientist average salary reported by グラスドア is $117,345 per year.

The chart from ZipRecruiter clearly indicates that the upward trend continues, as the average annual pay for a data scientist equals $118,042 a year.

The data collected by インディード・ドット・コム is slightly different than usual, though. The average salary that can be found on the platform tends to be the highest, but this time data scientists are said to earn “only” $112,957 a year on average. This number is also based on comparatively little salary data, in comparison with other sources. As already mentioned, these differences stem from a number of factors: the source itself, as well as the experience of the candidates, their location or knowledge, and the skills required for the specific position. How exactly does each of these factors affect the data scientist average salary? 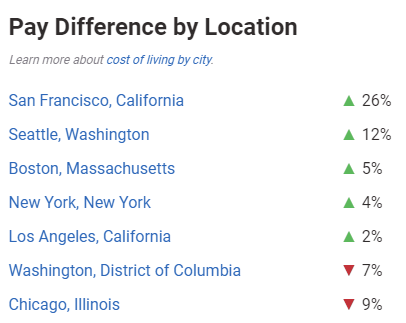 The impact that the level of experience and location have on average salaries can’t be ignored, but there are other factors that count too. Before taking a closer look at the additional skills that are likely to increase the average salary, it’s also worth considering specific employer requirements and their own standards. To give you some examples from popular companies:

The exact tasks they perform depend mostly on their level of experience, knowledge, and skills, as well as their location and their employer’s requirements.

The demand for data scientists has been growing over the years, as increasingly more companies want to tap into the power of big data and make good use of it. The more data scientists are needed, though, the more challenging it becomes to land the best candidates with the right skills and experience. Make sure you’re ready to offer a competitive salary and screen your candidates properly.